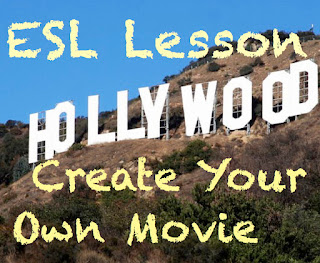 Here's a lesson for intermediate students and up that involves the students making a mock movie and pitching it to a movie studio.
Introduction: just a few minutes.

Come in pretending to be a director and mime filming the class. Elicit the concept of movies or film.

Lead in: around 7 minutes.
Demo these questions out and put students in groups to answer them.
1. Do you like watching movies? What is your favorite movie?
2. What good movies have you seen this last year?
3. Who is your favorite actor and director? Why?
4. What well known movies have been made in your country?


Lexis: around 10 minutes.
Elicit and CCQ the following

an actor, a star, a lead role, a supporting role
a director
a producer
a plot
a cast
a setting
a genre
a thriller
a horror movie
a comedy, a black comedy, a romantic comedy
a drama
a documentary
to pitch (a movie)
a twist


Study 1: around 5 minutes.
Matching with strips. Students match the definition with the word with strips of paper.

Study 2:  around 7-10 minutes.
Guess the movie. One student thinks of a movie and the other students have to ask yes or no questions to guess what the movie is. Make sure that students go through and ask all of the questions based on the lexis before guessing.

Activation: Around 20 minutes.
Demo: Have a pre-made movie created complete with a movie poster for a mock movie. Students take a few minutes to ask you about your film. You will probably have to elicit and train them to ask the right questions. For example, "who is the star of your movie? What is the setting? What genre is it?"

Set up: put students in groups and have them create their own movie based on the above words and questions. Monitor the students to check that they are doing the task and interact with them to give them  bit of practice with the words/questions.

Activation: The Pitch
Once the students have completed this, break the class and explain that they have to pitch their movie to a movie studio. Have a few students take the roles of movie studio executives and they are tasked with asking the other groups about their films. After they have spoken to a few groups, change the roles, and now the executives are film makers and have to pitch their movies. Once everyone has pitched their movie to someone, the class decides which movie they liked the most and why.

Feedback: just a few minutes.
After the class has discussed what they liked/disliked about the different movies, board the errors you heard and end the lesson with a joke.

Popular posts from this blog

Past Modals Intermediate Lesson Plan: "The Worst Week Ever"

March 14, 2016
Here's a lesson plan that is suitable for Intermediate and Upper Intermediate language students with past modal verbs being the focus. The lesson requires only about 15 minutes of prep to pull off and has a heavy focus on speaking. I recommend doing this lesson for groups of students who already have a decent understanding of past participles. Take a look! I also have a video demonstration of this lesson plan in action that I've posted below. Intro: 1 minute Come into class asking students how their day is going. Have a glass of water with you that you are drinking. When you they ask you about your day, spill the water all over yourself. Elicit the concept of having a bad day. Lead In: 5-7 minutes Demo out the questions and put students in groups 1. Do you often have bad days? 2. What are three things that can typically happen to make a day go wrong? 3. What are 4 bad, but funny, things that have happened to you this year? Target Language: 10 minutes  Before i
1 comment
Read more

May 20, 2012
Here's a lesson for solid intermediates and up with a language focus on the passive voice and crime lexis. At the end of the lesson, students take the roles of police officers and have to give a press briefing to the media about a crime scene that they witnessed. Ideally, you will need an empty room to set up a crime scene for the activation and a language school that is ok with you trashing things around a bit. There are other ways to get around this, if this is not possible. * I create tailored lesson plans for anyone who wants them. If you want me to create you a lesson from scratch, contact me, and I'll do one for you. Please follow my blog on the right to show your support. Introduction: just a couple of min. Do any of the following. 1. Show a clip from a movie that shows a police officer giving a press briefing to the media 2. Come in and immediately address the class as if they are police officers 3. Have a picture of a police chalk outline and ask students wh
2 comments
Read more

May 09, 2012
Here's a lesson requested by Mike R. that deals with students creating and talking about a made up country using a variety of different lexis. If you want your own lesson personally made for you, just let me know, and I'm happy to do it.    Introduction: Just a few minutes   1. Have pictures or drawings of various things that are special for your home country. For example, US teachers could use the Statue of Liberty, NYC, Hollywood...etc Elicit these various things out and ask students what country you are talking about. Lead In (around 7 minutes) Demo these questions out and have students discuss them in groups 1. What are 3 things that you like about your country? 2. What are three things that you dislike about your country? 3. If you had to live in another country what country would it be and why? 4. What 2 things would you change with your country to make it better? Tip: Pull one of your students up from the class and have them draw a rough picture of t
2 comments
Read more